Fastelavn is celebrated on the Sunday or Monday that falls 7 weeks before Easter. In 2018 the date for Fastelavn will be Sunday the 11th of February.

It’s celebrated the most at schools or kindergardens and it’s typically an event that takes up the whole day.

What is Fastelavn and why do we celebrate it?

The word “Fastelavn” comes from the word “faste” reffering to a long period of fasting, and it’s a way of celebrating the last night before the fast. Today the Danes aren’t too caught up on the religious aspect of Fastelavn, but it’s more of a fun day and tradition for the kids.

For the kids, the day is about dressing up in costumes and eating candy. (Hard not to like, right?) Schools or kindergardens usually buy special barrels for Fastelavn filled with candy. The kids then form up in a line and take turns hitting the barrel with a children-friendly baseball bat.

In the old days Fastelavn was a grown-up event. Instead of candy, the barrel had a black cat inside it, which symbolized witchcraft and evil spirits. Today, no animals are harmed in the process of Fastelavn, but to keep in touch with the old traditions, many barrels are decorated with a black cat on the outside.

In relation to the whole cat thing, two kids are typically crowned either Kattekonge or Kattedronning (Cat-King or Cat-Queen). The Kattekonge is the one who hits off the most important part of the barrel. What this part is varies; some say it’s the first board, some say the top, bottom or the last board. The Kattedronning is usually the one who hits off another important part of the barrel, this part also varies. This means that gender doesn’t play a role here – a boy can be crowned Kattedronning, as well as a girl can be crowned Kattekonge.

Is this just a Nordic form of Halloween?

In some ways, yes – Fastelavn resembles Halloween. Kids dress up and some even go trick or treating (which we in Danish call “rasle“), and there’s the whole witch-cat side to it. But besides that, Fastelavn is not about spooks or mysterious things.

If you haven’t realized it yet, it’s impossible to have a special day in Denmark without some type of special food. For Fastelavn it’s the fastelavnsbolle (bolle = bun). It’s usually filled with either creme or jam, it’s something you can make yourself, or just buy in February at your local bakery.

You can check out some websites here for recipes: mydanishkitchen.com or nordicfoodliving.com 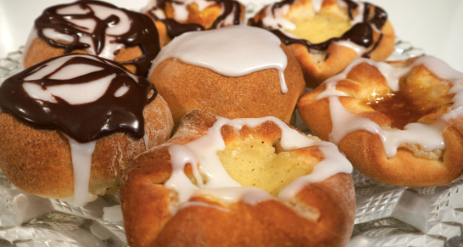 That’s how the popular kids song for Fastelavn begins. It goes:

Which rougly translates to:

Fastelavn is my name
I want buns.
If I don’t get any buns,
I’m going to make trouble.

Buns up, buns down,
Buns in my stomach.
If I don’t get any buns,
I’m going to make trouble.

Obviously the song is (not) a lyrical masterpiece and it’s all about the fastelavnsboller!

Want to get in touch?

Feel free to reach out to us through our contact page with any tips or questions, you might have.

All about Denmark is your comprehensive guide to life in Denmark. It has been created by Spousecare, a company which for the past decade has been helping expats establish their lives and careers in Denmark. Whether you have just arrived in Denmark or have been living here for years, this blog contains useful information for you. You can find all the information about getting settled and about daily life in Denmark on this blog.